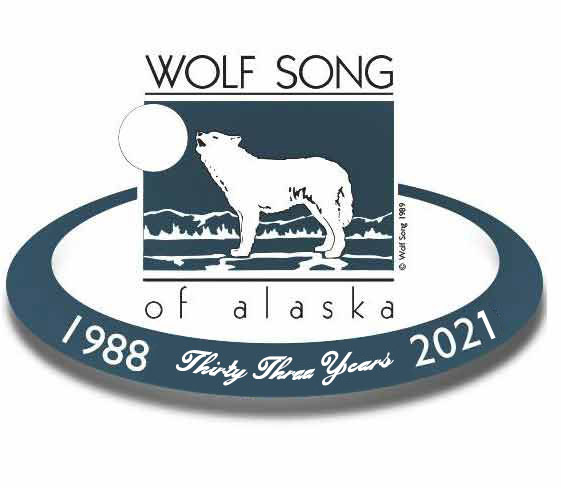 ABOUT WOLF SONG of ALASKA…

Wolf Song of Alaska is an IRS Classified 501(c)(3) nonprofit and apolitical organization committed to achieving an understanding of the wolf and other wild canids through education, science, and public awareness. Federal ID #92-0127397

Founded and incorporated in 1988 in the State of Alaska, Wolf Song of Alaska has distinguished itself as a highly visible and resourceful volunteer organization that is focused on the plight of the wolf and other wild canids, their natural history, their varied relationship with humans throughout the ages, and their role as a major symbol in folklore, myths, legend, art, and religion.

For decades, Wolf Song of Alaska’s expansive website and education programs have positively impacted the general public’s knowledge about wolves, wild canids, and their prey relationships.

Wolf Song of Alaska hosted the internationally-acclaimed "Wolves & Humans" traveling exhibit in Anchorage’s William A. Egan Civic & Convention Center. This magnificent and acclaimed exhibit toured museums throughout North America beginning in 1983 and was viewed by over 2.3 million visitors in museums in major cities across the North American continent.

Like many non-profit organizations, Wolf Song of Alaska depends upon the involvement and generosity of individual donors, corporate sponsors, tireless volunteers, and valued members from around the world.

If you would like to contribute to our programs, become involved, or if you would like more information about membership options, donation options, or sponsor opportunities beyond what appears on our website, please contact us at...