GPS Collar on a Wolf 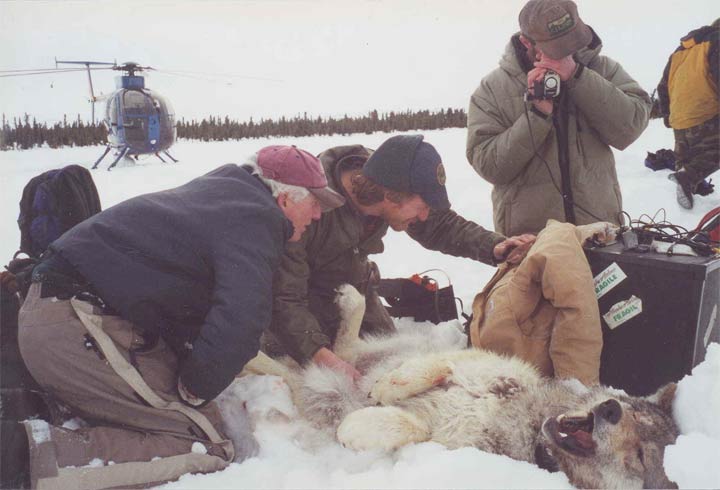 Photo: Kevin White (click to enlarge)
Alaska Department of Fish and Game biologist (left to right) Howard Golden, Tom Stephenson, and John Crouse using a ultrasound device to determine if this female wolf is pregnant and the stage of fetale develop

Introduction:
Wolves are an important component of the ecosystem in Alaska. It is estimated there are 7,000-9,000 wolves in the state, and they are a major predator of moose, caribou, and other ungulates. During each of the last 3 years, approximately 1500-1700 wolves were trapped and hunted by humans within regulated seasons. Wolves in the Nelchina Basin of Southcentral Alaska (figure 1) are part of an intensive management system that requires the maximum production of ungulates for human consumption. 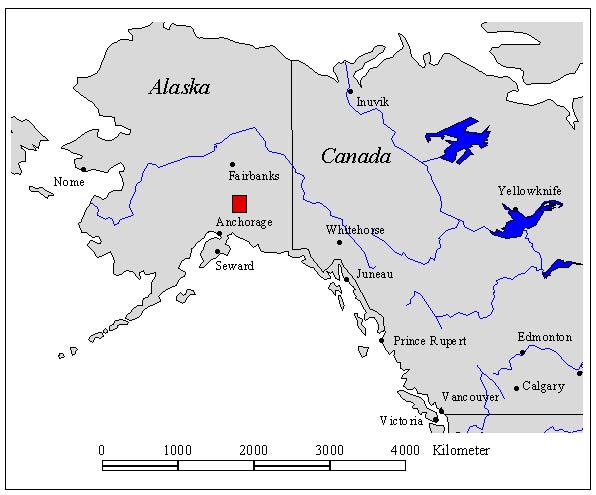 Objectives:
Our wolf research is focused on expanding our understanding of wolf-prey population dynamics in order to help our management of this system. New techniques and technology available today (e.g., stable isotope analysis and GPS radio collars) should allow for more explicit estimates of wolf kill rates, prey selection patterns and diet, and the spatial dynamics of packs relative to prey availability. In addition, we are working in close collaboration with ongoing research studies on moose, caribou, and brown bears in the Nelchina Basin.

When we catch wolves, we do it by darting them with Telazol from a helicopter. 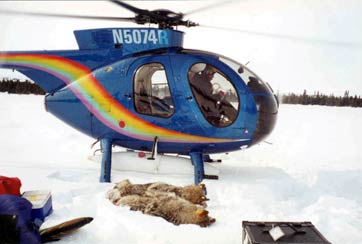 We have a pilot/observer in a small fixed-wing plane who first finds the wolves for us, either by following their radio signal if they are already collared or by finding and following tracks of the pack. As soon as we approach the pack with the helicopter, the wolves scatter indifferent directions.We pick one to go after first and dart it as quickly as we can. Once it is immobilized from the drug (usually 4-6 min.) we get a GPSfix onits location and go off to catch another wolf.  Again, the fixed-wing pilot finds another pack member by following its track or radio signal, and, we try to dart it as quickly as we can. We are usually able to catch 2-4wolves within 20-30 minutes this way.We then ferry them all by helicopter to a central place to collar and process them. Figure 3 shows  a just collared wolf. The satellite antenna is at the top of the collar and the battery box is below the wolf's throat. The GPS-collar of the young wolf is programmed in such a way that it determines his location at-1-hour intervals. 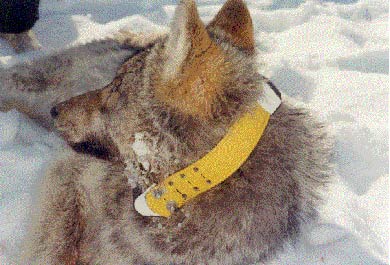 We download the data also by helicopter. The wolf's position is located by the collar's radio signal. A UHF signal from the ground station sent to the collar initiates the transmitting of the data. The complete download procedure (of approximately 1500 fixings) takes less than 3 minutes.

The results presented in figure 4 are for a 1-2 year-old male wolf, NW025. This wolf is a member of the Goose Creek pack that resides in the eastern Talkeetna Mountains within an area referred to as the Nelchina Basin in Southcentral Alaska. We first captured and radio-collared wolves from the Goose Creek pack in March 2000. We have counted as many as 12 wolves in this pack at one time. Wolf NW027, which was also fitted with a GPS collar, is a member of the B-S Lakes pack that resides northeast of the Goose Creek pack. We have counted up to 6 wolves from this pack. We do not yet have location data for NW027. 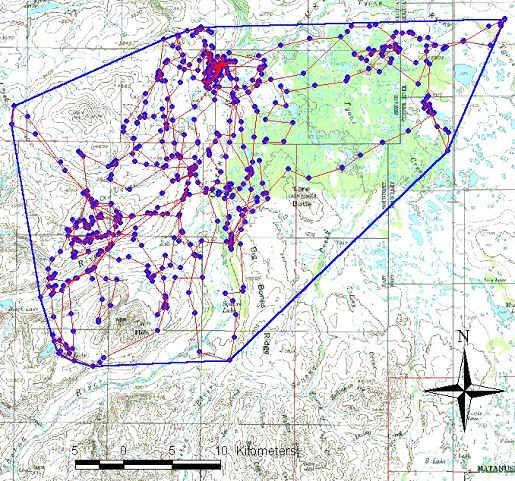 Fig. 4:  Location points (blue dots) of wolf NW025 (April 3 - June 4, 2002) connected in chronological order (red line), and the minimum convex polygon (blue line) of its home range. The cluster of locations at the top center of the home range indicates a den site

More information about the project:
The objectives of the wolf research project are to:
1.  Determine the year-round prey selection patterns and kill rates of wolf packs relative to varying densities and distributions of prey, primarily moose and caribou in and near the core calving areas.

5.  Estimate production, survival, and recruitment of wolves relative to varying prey densities.
Our use of radio collars is vital to meeting these objectives. We will use GPS and VHF collars to track wolves and locate kills. GPS locations will be downloaded remotely from the collars to backtrack wolves on a weekly basis during and around the calving period and on a biweekly to monthly basis at other times. Each download event will capture approximately 1 week's locations recorded at ˆ-1-hour intervals. Summertime observations will be enhanced by daily locations of all radio-collared wolves. The relative use of adult prey by wolves will be quantified through aerial and, occasionally, ground observations of kill sites. We will also assist the other research projects in examining causes of loss of radio-collared caribou and moose. As with the kill rate and prey selection estimates, GPS collar data and VHF radio telemetry flights will be used (1) to measure wolf movements relative to prey abundance and availability within and between packs, (2) to estimate movement patterns of wolves relative to core calving areas, and (3) to test the correlation of wolf movements with the availability of moose and caribou using data from ongoing research projects through spatial analysis techniques. We will analyze location and GIS data using ArcView spatial analyst software and S+ spatial statistics.

Alaska Department of Fish and Game