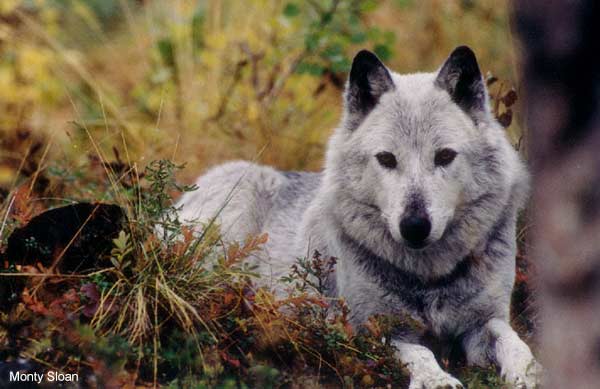 Spotlight on Zoo Science Smithsonian National Zoological Park Sophisticated genetic analyses of well-known mammals are increasingly exposing species that have been hiding in plain sight. Using such an analysis, a team of scientists affiliated with the Smithsonian's National Zoo and Museum of Natural History reports strong evidence for three distinct lineages of gray wolves that may, in fact, be three species.

Now, a new genetic analysis by Dinesh K. Sharma, Jesus E. Maldonado, Yadrendradev V. Jhala, and Robert C. Fleischer**, may mean re-drawing the boundaries of its realm. Their results were reported in a paper called "Ancient Wolf Lineages in India," published in the Proceedings of the Royal Society B, Biology Letters, in August 2003.

The scientists compared mitochondrial DNA sequences of recent and historical samples of wolves from lowland peninsular India and wolves from the Himalayas and Tibetan Plateau, with all available sequences from domestic dogs and wolves, and other canids such as maned wolves, jackals, and coyotes.

Previous studies have established that wolves and dogs are very similar genetically, with dogs beginning to diverge from wolves only about 15,000 years ago. Some authorities consider the two sufficiently similar to form a single species, although the traditional arrangement is to split them into Canis lupus-gray wolf-and Canis familiaris-domestic dog. In the jargon of taxonomy, the two are described as the "wolf-dog clade." (A clade is any group of organisms that includes the most recent common ancestor of all those organisms and all the descendants of that common ancestor.)

Historically, scientists have named at least 32 different subspecies of wolves, largely based on geography and differences in morphology. For instance, the wolves of the Arabian Peninsula are about a third the size of Alaskan wolves, and these are two of the named subspecies. Nonetheless, while wolves around the world are genetically variable, the variation doesn't always closely match the geography.

This is likely due to the fact that wolves have huge territories and individuals are known to travel as far as 1,000 kilometers (more than 600 miles). This means that without barriers to travel, such as those that occur now due to human activities and those that occurred intermittently in the past due to the rise and fall of glaciers, there is considerable mixing of genes from different wolf populations.

Up until now, however, Indian and Himalayan wolves had not been studied genetically. Indian wolves have been included in the subspecies Canis lupus pallipes, a name assigned to small, desert- and semi-desert-adapted wolves that range from the Indian subcontinent to the Arabian Peninsula. Himalayan wolves have been included in Canis lupus chanco, a subspecies name given to wolves that range from Kashmir in the west to China and Mongolia in the east. (See Map 1 below.) The new genetic analysis by Sharma and his colleagues suggests that the taxonomy of this group of wolves may need to be revised.
Gray wolves (Canis lupus) have a broad northern hemisphere distribution. Previously, Himalayan wolves were placed in the subspecies Canis lupus chanco (purple area) and Indian wolves in Canis lupus pallipes (orange area), but new analyses suggest that wolves in the area surrounded by a box on the map may form two distinct subspecies-or may even be different species.

Map 1: Gray wolves (Canis lupus) have a broad northern hemisphere distribution. Previously, Himalayan wolves were placed in the subspecies Canis lupus chanco (purple area) and Indian wolves in Canis lupus pallipes (orange area), but new analyses suggest that wolves in the area surrounded by a box on the map may form two distinct subspecies-or may even be different species. 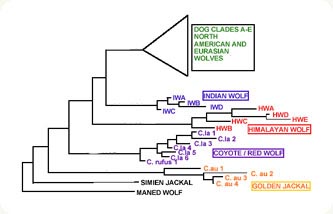 This tree represents the genetic relationships among wolves and some other canids. Note how animals in the wolf-dog clade are clustered, and separate from Indian wolves, while both diverge from Himalayan wolves.

It is interesting that these genetic results support the views of early taxonomists who looked only at the wolves' morphology. In 1847, B.H. Hodgson, who was British Resident in Nepal and an avid naturalist known as the "father of Indian zoology" (he also was one of the first to describe Buddhism and its history in detail) described the Himalayan wolf as a species, which he called Canis laniger. He distinguished it from other wolves by its very long muzzle, distinct coloration, and other features. Sharma and his colleagues were able to obtain genetic material from one of the same specimens Hodgson looked at to describe the species more than 150 years ago-it is housed in the British Museum-and, indeed, it matches their samples of Himalayan wolves.

Indian wolves are smaller than most gray wolves.

Later, in 1888, W. T. Blanford, another British naturalist in the service of the Empire as a member of the Geological Survey of India, described the Indian wolf as a species-Canis pallipes. C. pallipes is distinguished from C. laniger by its smaller size, much shorter and thinner winter coat, and smaller skull and teeth. But Blanford lumped the Himalayan wolf with the rest of the gray wolves.

Finally, in 1941, British Museum taxonomist R. I. Pocock created the current arrangement, in which Indian wolves belong to the widespread C. l. pallipes subspecies and Himalayan wolves to the widespread C. l. chanco. This study suggests that Hodgson's C. laniger and Blanford's C. pallipes may have to be revived or, at the very least, that these two forms should be named distinct subspecies.

It also suggests that wolves evolved in East Asia, with the Himalayan wolf an early form; only members of the wolf-dog clade spread beyond this region. It's not clear how the Indian and Himalayan wolves got left behind and then remained isolated. One thought is that past glaciation events trapped these wolves in refugia-areas of more benign climate among the glaciers-from which they then expanded to their current boundaries.

Indian and Himalayan wolves are now separated by a band of lush wet tropical grasslands called the Terai and by the Himalayan foothills, habitats unlike those occupied by either. Indian wolves live in arid and semi-arid grasslands and scrub forests, while Himalayan wolves reside in the cold, high-elevation plateaus of the Himalayas. (See Map 2.) What keeps them from breeding with each other, or with gray wolves where there is potential overlap in Kashmir, is obscure, but behavior differences that prevent mating are a possibility.

At first thought, this seems highly academic. Is it important whether there is one worldwide wolf species, or three separate ones? >From a conservation standpoint, it is. The Indian wolf population consists of only 2,000 to 3,000 animals, while the Himalayan wolf in India may number as few as 350 individuals (their status is uncertain in Nepal and Tibet). That these may be distinct and ancient species adds urgency to conservation planning.

Little is known about either Indian or Himalayan wolves, but both are persecuted by people. Himalayan pastoralists in particular dislike and kill wolves, which sometimes prey on their livestock. In Tibet, wolves are not even legally protected, although most of its other charismatic vertebrates are. So while gray wolves are threatened worldwide, these new wolves are in far greater danger of extinction.

Zoologist Jonathan Kingdon wrote, "Each species is a unique realization of the possibilities of being." Letting these wolves go extinct soon after discovering them would be like losing any irreplaceable treasure, like burning a painting only to learn it was a previously unknown Van Gogh.

**Sharma and Jhala are with the Wildlife Institute of India; Jhala is also a Zoo research associate and former Smithsonian postdoctoral fellow at the Zoo. Fleischer and Maldonado, now at the Smithsonian's Museum of Natural History, were formerly based at the Zoo. Sharma was a postdoctoral fellow in Fleischer's lab for six months in 1999, where he received training in genetic techniques and subsequently returned to India to establish a conservation genetics laboratory at the Wildlife Institute of India.