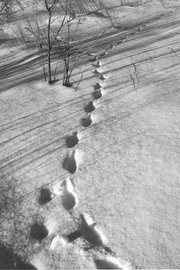 Fox often step in their own tracks; two sets may come together into one and then split again. They may have been made by the same fox, two different fox, or even several fox all stepping in the same tracks.

LAKE MINCHUMINA -- The fox tracks stood out sharply in the clean snow, cutting across my trail and heading on through young bare willow sprouts. Typical of winter fox tracks, two sets came together and appeared as one before splitting apart again. The fox had carefully stepped exactly in his own tracks when he passed by a second time, matching step for step to save the toil of breaking trail through deep snow.

Most predators do the same. A single wolf track might be one wolf, or it can split into 10 or more trails when, after following a single leader, the predators fan out. Even our sled dogs learn to set each foot into the very track of the dog ahead, so a long line of dogs leaves only one track.

I was skiing out the first four miles of our trapline trail, amusing myself with the new scattering of tracks. The two-day-old snowfall effectively erased older tracks, but the recent news of passersby lay clear and plain for my perusal.

The trail cut through willows and swamps, crossed streams and small ponds, and slipped past the occasional patch of stunted spruce. A splash of sun dashed over the snowy landscape, only to recede again behind a broken overcast as I skied on, little red plastic sled towing along behind. The end of trapping season was just two weeks off, and I wanted to clean and bait the sets these first few miles.

Snowshoe hares seem to be just starting to downslide from their decadal high and predators have already put a big dent in last summer's crop. Now lynx and fox were starting to go hungry, making them more susceptible to being lured in. I wanted to pick up any catch in a timely way, and make sure we didn't pass up any more critters hungry enough to investigate a chunk of rabbit or scrape of grouse.

In my little sled I towed a bag of half-pound chunks of rabbits and grouse with a bottle of lure, and a 22 pistol loaded with magnums just in case I caught a wolf. A separate sack contained the last of the rotted guts of last fall's moose to dump at a moose head tucked back into a patch of spruce, with wolf snares set nearby.

Safe in a case in the bottom of the sled lay a little .22 rifle. After an absence of several years, I had finally started seeing more ptarmigan around, and it sure would be nice to get a couple. That was why I was alone today; even my good old grouse dog does more harm than good when it comes to finding ptarmigan. Unlike grouse, when she flushed them they'd fly farther away instead of into a nearby tree.

As I followed the trail where it cut from a small slough into the willows, I noticed the softly rounded tracks of a lynx in the trail ahead of me. It rivaled in size the track of a medium-sized wolf, even though it might have weighed 20 pounds to a wolf's 80.

Those big snowshoe feet helped it float across the snow, sinking in only an inch or two even in deep snow, where a wolf would be up to its belly. Even a lynx will step in its own tracks when it passes the same way again, but is much less compelled to do so than most other critters. A fox, only a little smaller, has a foot a quarter the size of a lynx. The small foot makes them, like wolves, better travelers than the sedentary cat, but they depend more on packed trails and tend to travel open areas where wind-blown snow has packed enough to hold their weight. This is one reason why wolves and fox travel our trails, while lynx rarely do so for more than a few feet.

I had a trap just a couple hundred yards ahead, but typically in 50 feet this lynx drifted off into the willows. Replacing that track was the trail of a fox, which took its last step into my trap. The fully-prime cross phase fur would make a fine hat.

I rebuilt the cubby, tossed in a piece of rabbit and dipped a twig into my bottle of Pacific Call. I smeared the musky, sweet-smelling lure onto the tree trunk above the trap, where the odor would carry much farther than the rabbit, and then stuck the twig, lure end up, into the snow inside the lean-to of sticks over the bait.

Tiny lacy tracks dotted through the snow, beginning and ending in nothing. Redpolls, probably; they could have been chickadees, but the tiny sparrows traveled in flocks big enough to cover the ground like this with their tracks in their endless search for seeds. My skis carried me on softly through the snow, past willows and cattails and more willows.

The ptarmigan startled me. Three of them burst into flight from the brush a hundred feet to my right, cutting away and almost out of sight before settling down again, hidden now by low willows. I dug out the .22 and tromped over in case I might find them. Where the willows bumped up against a grass-lined pond beyond, I found only the little four-point star tracks, pattering along in long (for a bird with three-inch legs) purposeful steps. Typically, they had landed just out of sight to dash off on foot. I let them go; maybe some lynx would have one for supper instead of me.

Through more cattails, then more willows, and across the beaver pond I skied, pausing in the willows on the far side in surprise at the tracks that awaited me: the classic two-by-two tracks of a marten! The fox-sized paws of the 2-pound animal helped it float even better than the lynx.

Marten don't come out on the willow flats much when lynx abound, but this was February, their mating-and-dispersal month, when small floods of them suddenly dash about. This one had made a fine living off the contents of my next cubby. The trap, buried lightly in snow to hide it from fox and lynx, had been incapacitated by an additional snowfall and the light weight of the marten failed to spring it. Cleaning and generously baiting the trap, I moved on.

A second marten cut my trail a half mile ahead, a smaller one, probably a female judging by the small size and the pointy, more delicate track whose foot lacked the heavier male's numerous stiff spreading hairs acting as snowshoes. This one had spent some time hunting in the area, crisscrossing the drifts and narrow grassy drainage the trail followed.

The marten didn't need my packed trail, but did investigate where a mouse trail crossed it. The voles usually stay well below the snow, out of sight of predators and down where temperatures are warmer, but they had emerged to cross where the packed trail had squashed their subnivean homeland. Their tiny footprints made a tiny trail in the thin layer of soft new snow, out a hole on one side of the trail and three feet straight across to a hole on the other side, with a tidy little bathroom just outside each exit.

The marten had sniffed at one hole, followed the trail to the opposite hole, crossed it and followed it back to the first hole before giving up and scampering on. Like any good tracker, it had not erased the evidence by stepping into the trail itself. Maybe the marten didn't do that on purpose; most animals do travel in the trails made by their prey. But maybe that little marten knew better. Maybe, like all those whose livelihoods depend upon understanding the animals around them, she knew she could learn a lot from tracks in the snow.

Miki Collins is a trapper who lives near Lake Minchumina.