From Wikipedia, the Free Encyclopedia 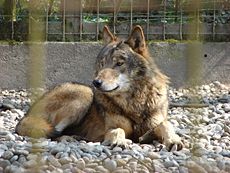 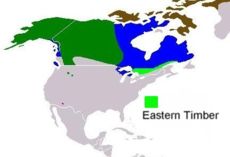 The Eastern Wolf (Canis [lupus] lycaon) also know as Eastern Canadian Wolf or Eastern Canadian Red Wolf is traditionally considered to be a subspecies of the Gray Wolf. Sometimes it is also viewed as a result of historical hybridization between grey wolves and red wolves or coyotes. However, recent molecular studies suggest that the eastern wolf is not a gray wolf subspecies, nor the result of gray wolf/coyote hybridization, but a distinct species (Canis lycaon)[1][2]. Many names were proposed, including the Eastern Wolf, Eastern Gray Wolf, Eastern Timber Wolf and Algonquin Wolf, although Eastern Wolf has appeared to gain the most recognition. Eastern Wolf was recently recognized as a potentially distinct species, but closely related to red wolf [3]. However, some authors suspect differentiate for two species. This is, however, still not an official status. This is identified so early, as 1970. Now, many international and government organisation carry out scientific research for their ecology, taxonomy, genetic and influence to ecosystem. the Eastern Wolf is smaller than the grey wolf and has a grey-reddish coat with black hairs cover on back and sides thorax[citation needed] . The mtDNA analysis confirm that eastern wolf, belonged to ancient form primitive wolf (with red wolf) origin from North America in 750 000 years ago in east part of North America (Nowak,1979, 1992). This sequence of halotypes show elements similar to red wolf and probably is a part if this species. Scientist suggest that Eastern Wolf population know as "red wolf" was extirpated from the wild in the southeastern United States and now is very endangered and slowly reintroduced to wild nature.

The Eastern Canadian wolf is just thought to be the remnant northern range of a once continuous range of a native canid - the Eastern wolf (E.C. w & Red Wolf). The pre-Columbian range is thought to include US states east of the Mississippi and South of the Canadian Shield-St. Lawrence corridor (Aria Johnson & Brad N. White, 2003 ). The Red Wolf is slowly being re-introduced into the wild in areas like Alligator River National Wildlife Refuge in North Carolina. Eastern Wolves (and therefore Red Wolves) are very small in size compared to the Gray Wolf (Canis lupus) living in the boreal forest north of Lake Superior in Ontario. Unlike the Gray Wolf, the Eastern Wolf in Algonquin Park has never been recorded with an all-black or all-white coat (wolf research in Al. P. cited 2008). Eastern wolf mainly exist in Algonquin Park in Canada-USA border. Type Algonquin is pure genetic population of Eastern wolf, type-Ontario is hybrid with grey wolf (possible with C. l. nubilus or C. l. griseoalbus ad etc. ) (Wilson et al. 2000). Mech and Frenzel (1971) suggest, when they stated that the northeastern Minnesota timber wolves are assigned to C. l. lycaon, but they are from an area within 150 km of the range of C. l nubilus as described by Goldman (1944) Type live in South of Algonquin Park is mix Eastern Canadian Wolf with Coyotes.

The Eastern Wolf is smaller than the Gray Wolf. It has a pale greyish-brown pelt. The back and the sides are covered with long, black hairs. Behind the ears, there is a slight reddish colour. These differences in attributes are thought to be a result of their Red Wolf ancestry. The Algonquin wolf is also skinnier than the Grey Wolf and displays a coyote-like appearance. This is because wolves and coyotes often mate and breed hybrid wolf/coyote pups in the park. The Canadian Parks and Wilderness Society states: "Hybridization with coyotes has historically been a precursor to the decline of Eastern wolf populations. The Committee on the Status of Wildlife in Canada (COSEWIC) has identified hybridization with coyotes as one of the major threats facing the Eastern wolf, and hybridization continues to pose a serious challenge to red wolf recovery efforts in North Carolina." Because the two animals looks so much alike, a ban on the hunting of Algonquin wolves and coyotes has been in place to make sure no accidental deaths occur.

Grey wolves will attack, kill or drive out coyotes if they find them, but recent studies by John and Mary Theberge suggest that Algonquin red wolf males mate and accept coyote females. John Theberge states that, because coyotes are smaller than wolves, that female wolves would be less likely to accept a smaller mate.
Range:

The Eastern Wolf mainly occupies the area in and around Algonquin Provincial Park in Ontario, and also ventures into adjacent parts of Quebec, Canada. It also may be present in Minnesota and Manitoba. In the past, this species might have ranged south into the United States, but after the arrival of Europeans, these wolves were heavily persecuted and became extirpated from the United States. In Canada, exact numbers of Eastern Canadian Wolves are unknown.

In Algonquin wolves often travel outside the park boundaries, and enter farm country where some are killed. "Of all the wolf deaths recorded from 1988 to 1999, a minimum of 66% was caused by humans. Shooting and snaring outside park boundaries were the leading causes of death for wolves radio-collared in Algonquin Park" (Theberge 1998, CBSG 2000). One wolf that was radio-collared in July 1992 was located in October in Gatineau Park (north of Ottawa), which is 170 km from Algonquin Park. By mid-December it had made its way back to Algonquin ,and then, in March 1993, this wolf's severed head was found nailed to a telephone poll in Round Lake by a man who hated wolves.
Diet: