Little Red Riding 'Tude-- a Cheeky Spin on a Classic 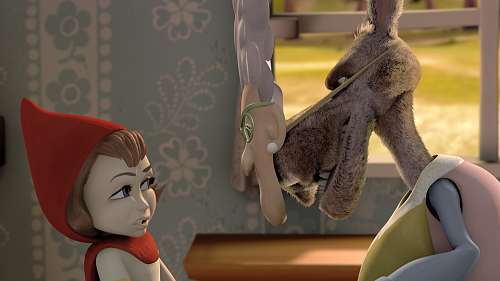 The Wolf is an undercover reporter in sheep-eater's clothing. Granny is into extreme sports. And Red Riding Hood's version of their story isn't the only one the cops want to hear in Hoodwinked, a loopy cartoon lampoon of the beloved fairy tale.

It's an anarchic computer-animated tribute to the classic Warner Brothers 'toons of the '40s. Come to think of it, Warner spoofed the heck out of Red in Little Red Riding Rabbit in 1944.

Even though it's basically a 10-minute short puffed up to fill 80 minutes, Hoodwinked has laughs and plenty of them.

Because really, this story is all about the goodies. You know, the stuff the muffin man whips up, the sweets Red stuffs into her basket to take to Granny, the schnitzel on a stick that the beefy Bunyon-esque woodsman is peddling, when he isn't auditioning for a better acting job.

Red (voiced by the princessly Anne Hathaway) swaps karate chops with The Wolf after we've been through the "What big teeth/What terrible breath you have" bit.

And then the cops bust in. Open-and-shut case, right? The Wolf (Patrick Warburton, hilarious) is disguised as Granny. The real Granny (Glenn Close) is tied up in the closet. The clueless woodsman (James Belushi, with a Swiss accent) butts in just in time to save everybody.

And we all heard the wolf yell, "I'll get you, and your goody basket too!"

Not so fast there, drawls the wolf.

"Yeah. The wolf did it. Talk about profiling."

Let's hear his side of the tale.

Somebody's stealing everybody's goodies, mainly their recipes. The Muffin Man is in Chapter 11. There won't be a goody-baker in all the forest if the "goody bandit" isn't stopped. And that bandit might not be the wolf.

We hear and see differing versions of the tale, Rashomon/Citizen Kane style.

We meet the caffeine-jagged squirrel photographer (a hoot) who is the wolf's sidekick. We watch the Three Little Pigs (cops) gulp down the evidence.

It's a musical, so there's this hilarious Billy Goat Gruff who sings and picks the banjo because a witch's spell keeps him from talking. A stool-pigeon sheep (Chazz Palminteri, a stitch) tips off the wolf. A nosy bunny (Andy Dick) sticks his ear in everything. Oh, and a detective frog (David Ogden Stiers) tries to piece the puzzle together.

It's funny, in fits and starts. The 3-D animation is rudimentary, sort of like Pixar 1.0, with the critters looking like plush toys. Think Valiant, not The Incredibles.

But it is tuneful, and kid-appropriate, even if all the verbal gags are aimed at parents. If your tykes are old enough to know the Grimm version, maybe they're ready to hear "the truth" about Red Riding Hood.
Rmoore@Orlandosentinel.Com