Extinct Wolf a Symbol of What Japan Has Lost 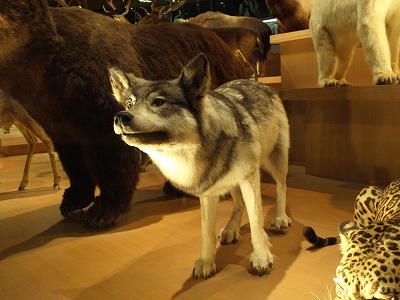 The Japanese wolf officially became extinct 99 years ago. More accurately, there has not been a confirmed sighting since the last of the species was captured in the village of Higashi-Yoshino, Nara Prefecture, in 1905.

But is the species really extinct? My thoughts turned to various extinct animals when the Paleontological Society of Japan last Sunday released a picture of a wolf's skull, said to be the largest ever discovered.

Two years ago, a forum titled ``Nihon Okami-no Sonogo'' (What's become of the Japanese wolf?) was held in the village of Otaki in Saitama Prefecture. There had been reports of wolf sightings and howls heard. In this village, they once tried to lure wolves by playing an audio tape of howling Canadian forest wolves.

Folklorist Kunio Yanagita was also interested in the Japanese wolf. In the early Showa Era (1926-1989), Yanagita wrote in his book ``Okami-no Yukue'' (Wolf's whereabouts): ``I do not subscribe to the theory that this species is extinct.''

However, he was unable to conclude the animals were still around, either. With too little evidence to go on, he noted, ``My sense tells me we may never know the answer.''

In Australia, a cloning project is under way to bring an extinct species back to life. The project team has taken a DNA sample from the preserved specimen of a Tasmanian tiger, and has succeeded in partially duplicating this sample. The Tasmanian tiger is believed to have been extinct for 68 years.

The concept of ``regeneration'' is the theme of ``Warai Okami'' (Laughing wolf), a novel by Yuko Tsushima published by Shinchosha.

The author draws a parallel between Japanese wolves and a boy and a girl who are living in the chaos of post-World War II Japan.

In the novelist's mind, the Japanese wolf is a symbol of what Japan is losing today, and the wolf also stands for the vitality that can ``regenerate'' contemporary society.

A monument inscribed with a haiku was erected in the village of Higashi-Yoshino five years ago. The haiku by Toshio Mihashi says: ``I walk/ With that wolf/ That is no more.''